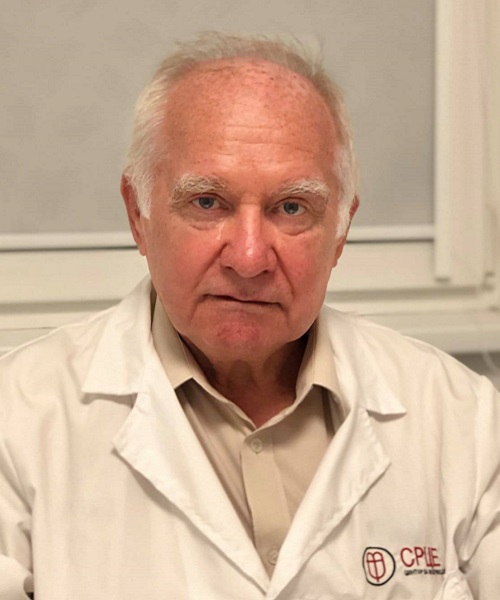 He was born in 1955. in Bitola. He has been working as a consultant in PHI “Internal medicine Center, Srce” for many years.

He completed primary and secondary education in Skopje.

He graduated from the Medical Faculty in Skopje in 1981. He passed the professional exam in 1982.

Since 1983 he has been employed at the Rheumatology Clinic at the Medical Faculty in Skopje.

1992 At the Medical Faculty in Skopje he defended his doctoral dissertation “Clinical and humoral immunological aspects in systemic sclerosis”.

He works at the Rheumatology Clinic as a department head.

He had professional stays at the Clinical Center in Ljubljana and at the Military Medical Academy in Belgrade.

He is also the lead researcher of the first realized scientific research project of the rheumatology clinic funded by the Ministry of Science entitled “Treatment of Raynaud’s phenomenon with low-energy laser therapy”.

He is a participant in 16 international and domestic projects as a lead researcher, or co-researcher.

Author of the book “Raynaud” phenomenon.

He is the author of The Treatment of Raynaud’s Phenomenon with Low-Energy Laser Therapy.

He is the author of the chapters on systemic sclerosis, systemic lupus erythematosus, poly-dermatomyositis, osteoarthritis, painful lumbar syndrome and painful cervical syndrome in Practicum in Internal Medicine. He is the co-author of the handbook “Treatment of rheumatoid arthritis”.

He was a member of the forum for musculoskeletal problems established by the Faculty of Medicine, which harmonized the contents of the guidelines for primary health care within the project for continuous medical education and transition of the health sector in the Republic of Macedonia.

He is one of the initiators for the establishment and a longtime member of the editorial board of the webdoctor.com.mk portal.

This website uses cookies to improve your experience while you navigate through the website. Out of these, the cookies that are categorized as necessary are stored on your browser as they are essential for the working of basic functionalities of the website. We also use third-party cookies that help us analyze and understand how you use this website. These cookies will be stored in your browser only with your consent. You also have the option to opt-out of these cookies. But opting out of some of these cookies may affect your browsing experience.
Cookie Policy Always Enabled
We use cookies to administer our website, analyze trends, track user activity, and enable personalized promotional messages and ads. When you first access the website of the CENTER FOR INTERNAL DISEASES - SRCE P.Z.O. SKOPJE, you will receive a message informing you that we are using "cookies". By clicking the "I Agree" button, closing the pop-up window or continuing to use our website, you declare that you understand and agree to the use of these technologies, as explained in this Privacy Policy cookies. The notification has a button "Cookie settings" in order for you to choose which cookies with information about your visit will be saved. Each cookie type has an explanation for them, and a detailed explanation of the cookie types can be found in the continuation of this cookie policy. You do not have to accept cookies and their use may be revoked at any time (information on how to control cookies is contained below). You can change your browser settings to restrict or ban cookies, and you can delete them from any device at any time. If you do not agree or delete the cookies some parts of our site that you access may not work as they should or may take longer to open.
Functional
Functional cookies help to perform certain functionalities like sharing the content of the website on social media platforms, collect feedbacks, and other third-party features.
Performance
Performance cookies are used to understand and analyze the key performance indexes of the website which helps in delivering a better user experience for the visitors.
Analytics
Analytical cookies are used to understand how visitors interact with the website. These cookies help provide information on metrics the number of visitors, bounce rate, traffic source, etc.
Advertisement
Advertisement cookies are used to provide visitors with relevant ads and marketing campaigns. These cookies track visitors across websites and collect information to provide customized ads.
Others
Other uncategorized cookies are those that are being analyzed and have not been classified into a category as yet.
SAVE & ACCEPT
Powered by