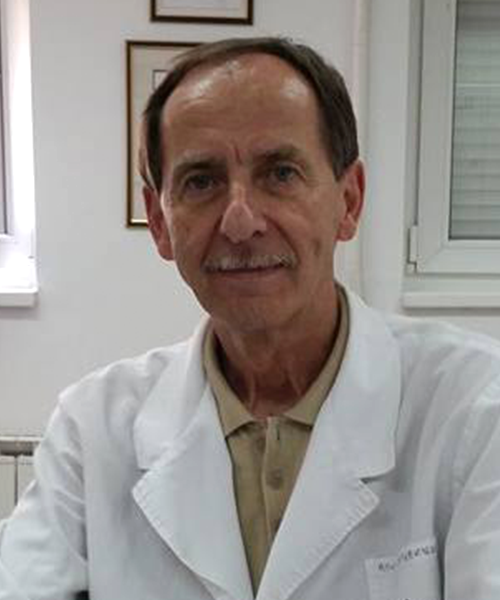 1973 Faculty of Medicine at the University “St. Cyril and Methodius ”in Skopje

Consultant in PHI “Center for Internal Diseases HEART” Since 2013

Elected professor at the Faculty of Medicine in 2000

Elected associate professor at the Faculty of Medicine in 1995

Elected assistant professor of Internal Medicine at the Faculty of Medicine at Ss. Cyril and Methodius in 1990

After a three-month stay in Lyon, France, at the University “St. Eugene – Jules Courmont and Edward Eriot he introduced endoscopic ligation and cryotherapy to treat bleeding hemorrhoids

In 1990, he promoted colon endoscopy as a screening procedure for the early detection and removal of precursors of colon cancer

Head of Digestive Endoscopy Laboratory at the Clinic for  Gastroenterohepatology at the Medical Faculty of Ss. Cyril and Methodius in Skopje

Member of the Ethics Committee at LKM

Member of the European and World Gastroenterological Association

Member of the World Association for Digestive Endoscopy

Member of the Macedonian Medical Association

Member of the Association of Internists of Macedonia

1991 – Study stay at the City Hospital in Nuremberg, as a scholarship holder in the city of Nuremberg, Germany

1985 – Stay in Lyon, at the Universities “Eduard Eriot and St. Eugene ”as a scholarship holder in the city of Lyon, France

Plaque of the Medical Chamber of the Republic of Macedonia, 2002

Author and co-author of more than 80 scientific research papers

Epidemiological Characteristics and Quality of Life in Patients with BCC (Mediterranean for BCC, BCC working group), 2003

Epidemiological Characteristics in Patients with Ulcerative Colitis and Crohn’s Disease in the Republic of Macedonia, 2000-2003, leader

The Place and Role of Medical Therapy in the Prevention of Varicose Veins in Patients with Cirrhosis, 2002-2004, Macedonian Academy of Sciences, research assistant